Skip to content
As promised, a few days ago I circulated the draft constitution I have been working on for the past month. (Links to Draft:  English / French)  There was no real need to re-invent the wheel and start from scratch.  I took as a base the ADC-ICTY Constitution.  While not perfect and certainly limited to the ICTY matrix, it has been tried and tested.  Based on my experience both as a member and having served on numerous ADC-ICTY committees, including three years on the Executive Committee, two of which as President, I believe this document provides a solid point of departure.  Last year I forwarded it to the Coordinators of the ALC-ICC, recommending its utility.   END_OF_DOCUMENT_TOKEN_TO_BE_REPLACED

After a year of mulling the various options available for List Counsel in organizing themselves to collectively meet the challenges they face at the ICC, the best option that emerged was the formation of a truly professional Bar.  While an association – as in a trade union – would be simpler and quicker to form, when considering the permanence and intended undertaking of the ICC, only a genuine professional Bar would be capable of having the desired enduring influence. Such a Bar will require ICC recognition: a tall and time-consuming order.  List Counsel must nonetheless soldier on in constituting a Bar.  The starting point is the drafting of a constitution, a collaborative process that is well under way, overseen by the coordinators of the Executive Committee formed last year by the List Counsel interested in establishing an ICC Bar for List Counsel.  Once the Constitution is adopted, the Bar can be registered and commence functioning. So, what of this Bar and how should it be constituted?

END_OF_DOCUMENT_TOKEN_TO_BE_REPLACED

After a few hastily organized meetings during last year’s seminar, a group of 15 or so members of List Counsel were selected to serve as an Executive Committee (“EC”).  Two members, Wang You Sando and Raymond M. Brown were selected as coordinators.  Over the past year, Sando and Raymond have been overseeing the drafting of a statute for an association.   Those on the EC have had an opportunity to comment on the draft.  It was hoped that the draft would be finalized and ready to be circulated to List Counsel and to the Registrar during this year’s Seminar of Counsel.  But, even before the seminar, a debate had begun as to what sort of entity List Counsel should form: An association, similar to the ADC-ICTY, or a Bar as in the French Civil Law system. END_OF_DOCUMENT_TOKEN_TO_BE_REPLACED

As in the past, the seminar was mostly an update, and for the most part not terribly rewarding.  It was heartening to hear from the new Registrar, Herman von Hebel, that changes are afoot in the Registry.  He brings lots of practical knowledge and experience.  There is already a feeling that he will be more understanding to the needs of List Counsel.  From my brief conversation with him (I have known him since 2001), he seemed genuinely interested in working constructively with List Counsel. END_OF_DOCUMENT_TOKEN_TO_BE_REPLACED 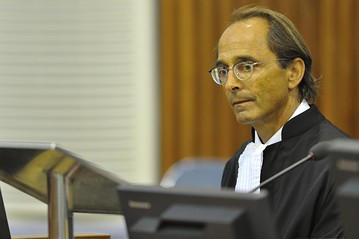